SharePoint Going Strong in 2014: Are You Following?

“ A data thread from stackexchagne.com, which is an authentic online source to offer software answers, sates that, since 2006 the number of SharePoint licenses has gone up. In 2006 it was 75 million and by 2011 it had given away 135 million licenses. With SharePoint 2013 introducing several newer concepts, and mobility playing a major part in this new change, much has changed with approach of development when a developer makes use of SharePoint. ”

Much emphasis has been given over sharing and being social. The cloud environment is most talked about in the 2013 version. Support has been given to native iOS and android mobile and tablet devices. Much flexibility in any organization workflow has been introduced in SharePoint 2013. All these coming together are making it one of the most sought after technology of future.

The prime intention for all these introductions has been to offer a better platform where developer can perform or build in a much more effective way. The managing and organization will be lot easier adding value to the production. The finding of information will be easier with cloud as a base and social connectivity. 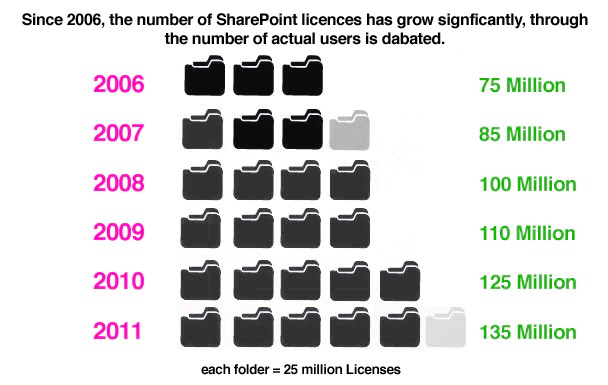 A little about SharePoint 2013

This version of SharePoint comes with various integrated features which is destined to change the way people see this technology for all these years. There has been major focus given over improving employee efficiency which will be done through bringing the SharePoint aggregated task list in one place.

The enterprise search will be much faster and data could be stored both in online and offline storage with the help of SkyDrive Pro which will e integrated with Office 2013. All these together and few other additions like collaborating alert obtaining when any content is being modified in Facebook will prove to be of major help.

For a quite long period SharePoint has been used as a web CMS primarily but now according to survey people are making the most of it in many other necessary spaces. According to Fall 2011 SharePoint Survey results 46% user use it as a custom app, 48% as a BI, 53% as a social collaboration, 67% as work flow management tool, 78% as a web CMS and 61 as enterprise and lastly 31% as content repository. With a right development team SharePoint development services can turn a whole organization into a better future and this has been described below from the context of SharePoint 2013 offerings.

There are several areas which are greatly enriched with this technology and those are shard below.

a. Cloud Model: This one gives the freedom to developer for creating of app. These apps in return enhance to the functionality power of your online or offline front, benefits users accessing the same through it.

b. Programming Model: Cross-platform supporting technology like HTML, CSS, JavaScript and OAuth are brought into picture of development. Visual Studio and SharePoint Designer have been modified to quite an extent which is expected to help developers while delivering service.

c. Mobile Apps: SharePoint 2013 offers the scope of combining Windows Phone apps with any of SharePoint modules. One can organize and manage the whole operation via this only and this one hence have been the best inclusion so far looking at the present trend of industry.

The elaboration above details SharePoint’s present status and future scopes. Now, while hiring any developer you can authenticate whether he is conversant with all these information.