Xamarin Vs. React Native: Which Framework Is Best For Cross-Platform App Development?

“ Xamarin and React Native are two open-source mobile app platforms for developing mobile apps for iOS, Android, & Windows. Read on to find which one is the best? ”

What Is React Native?

A JavaScript framework is popularly termed React Native. The purpose of React Native framework is to write real, innately rendering mobile applications for Android and iOS. It is acquired from Facebook’s JavaScript library, React, for creating user interfaces. It focuses on mobile platforms rather than on browsers.

In simple words, it has become possible for web developers to write mobile applications that feel completely native, all from the comfort of the JavaScript library that we already adore. Furthermore, it is easier to share code between platforms, moreover, with the help of React Native simultaneously developing code for both Android and iOS has become effortless.

While writing React Native applications, a mixture of JavaScript and XML-esque markup, known as JSX is used. Then secretively, the React Native “bridge” requests the native rendering APIs in Objective-C (for iOS) or Java (for Android). Hence, your application will be built using real mobile UI components and not web views.

React Native backs both the iOS and Android OS and it certainly has the potential to broaden its platforms. 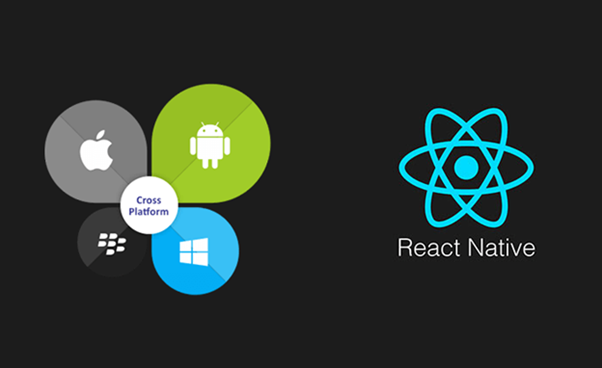 Advantages of Working With React Native

React Native is an open-source framework, which means that it allows the whole community of developers to analyze all documentation related to this technology without charging a single penny.

React Native framework is community driven, through React Native cross-platform development it is possible to reach out for guidance from other developers, you can also search for appropriate data, and even assist the struggling developers.

Being a developer you also have the freedom to take or give feedback on the ongoing project. Moreover, developers are inspired to share their teachings and learnings with everyone. This way the whole process will become a more collaborative experience.

The adequacy of the platform lies in upgrading exhibitions with the utilization of native modules and controls. It works by collaborating with Android and iOS local parts and continues to produce codes to native APIs, autonomous of any obstruction.

Execution enhancement and improvement is an immediate consequence of the framework utilizing a particularly unique thread, separate from the local APIs and UIs. You also have the choice to explore other options like a WebView, but remember, it can poorly affect the performance of your app.

This aids in decreasing the time and cost of the task and is a boon for all business and application developers. What's shockingly better is the situation where the business already has an application written in React – in that situation, the development cost is also reduced because a large part of the current code can be reused to make a new application.

Pre-developed parts in the open-source library empower designers to uninhibitedly access codes. These codes are as of now written and the engineers will prepare to convey them. The outcome will be faster development.

The advantage of code reusability presented by React Native decreases expenses of application creation to a great extent. With this framework, coders need not compose separate codes for iOS and Android and can just code the application in the current language. This results in the requirement for a more modest group of native developers for all application development organizations and guarantees a sharp decrease in project fulfillment time helped by the ability of the React Native community.

A software company named Xamarin started in 2011, though in 2016, Microsoft acquired the company. Xamarin offers a wide variety of tools to developers, which they can use for building cross-platform mobile applications.

Xamarin frameworks are used to develop a cross-platform mobile application using the C#. As a result of using this framework, developers can create apps like a website for mobile by making use of JS libraries. The website is packed in a container which gives the feel of a native app.

However, Xamarin works on three mobile platforms (Android, iOS, and Windows) but it offers a single language C# and runtime. Using Xamarin cross-platform development, developers can develop a mobile app that can look entirely native. In Xamarin, one C# codebase has access to all the features of native SDK.

Developers with the following goals can use Xamarin:

One of the primary advantages of Xamarin cross-platform development is that a solitary language C# makes a wide range of solutions. In addition, there's no compelling reason to switch between environments — you can do everything in Visual Studio. This is helpful and time-effective because engineers conduct a similar process utilizing one language rather than two unique dialects. Subsequently, Xamarin is not difficult to learn.

Xamarin is frequently referred to as a "write once, use all over" development stage since it makes a 60-95% reusable code. A solitary codebase can run on different stages giving local execution and may require slight changes only.

A sharable codebase and a solitary technological stack save time spent on the development cycle. You code once and afterward, can reuse most of this code for different solutions, making just slight changes and not investing time in a similar procedure. This implies you can deliver your product faster.

Since everything is written in C# and inside the .NET framework, there is no requirement for isolated groups chipping away at the application. The turn of events, testing, and organization are altogether streamlined when performed by a solitary group, taking out extra costs and ensuring quick time to market.

Xamarin Vs React Native: Side By Side Comparison

Since cross-stage and hybrid frameworks are known for forfeiting execution thus for comfort, this classification is foremost to your final choice.

However, both Xamarin and React Native propose near-native performance, Xamarin runs the quickest code on Android and iOS and has a (UI) for utilizing native tools.

Popularity doesn't generally decide the worth of programming however it affects how others communicate with the product. Qualities like an enormous talent pool, exhaustive tooling, and an incredible local area often spin around the popularity of the software.

For similar reasons as verified above, you can expect that React Native has a bigger and more supportive community than Xamarin.

At the point when React Native was younger, its local area was restricted. Nonetheless, as the framework develops and JavaScript frameworks overall earn more consideration, it's become simpler to spot individual React Native developers.

Both Xamarin and React Native have pre-assembled components to improve execution and the designer experience. However, notwithstanding React Native's live reload highlight, the framework overall could not hope to compare to Xamarin.

Xamarin.Forms alongside Xamarin.iOS and Xamarin.Android enables developers to make platform explicit local UI parts. Along these lines, Xamarin designers can draw nearer to native-like execution than React Native developers might be able to.

JavaScript and its frameworks, including React Native, utilize the just-in-time (JIT) compilation. However accumulated dialects regularly run faster than deciphered dialects since they are converted to machine code before execution, JIT compilation might be the smartest possible solution.

Xamarin or React native? It is not easy to choose between the two because both frameworks share many similarities and enable developers to build cross-platform mobile apps with near -native performance.

Surbhi Vats is an experienced IT blogger, her blogs has been published on sites like Medium. Her keen endeavors to know and understand current industry trends has helped users to comprehend regular uproars happening in the industry. Also, organizations around the globe recognize her knowledge-oriented blogs. She is a tech expert who is capable of engendering business growth.